Everyone was there, from trained athletes to babies in pushchairs and even dogs with their owners!

The race aimed to raise funds for the Netteboulou programme led by the NGO Vision du Monde, and specifically to finance access to potable water and clean toilets.

Access to potable water is the source of an entire community’s development. Diseases linked to water are a constant threat for vulnerable populations, keeping children out of school. Because access to water is a vital need, it is one of Vision du Monde’s greatest battles in the world.

Access to potable water is one of the 17 Sustainable Development Goals of the United Nations. It is a fundamental human right that too many people are still deprived of. While turning on a tap is an anodyne act for many of us, 844 million people still do not have access to safe drinking water. 159 million people are forced to drink unclean water responsible for sometimes fatal diseases. Water scarcity risks becoming more intense in decades to come due to climate change.

The consequences of a lack of access to water on children

In many countries, it is children, young girls in particular, who have to travel 0.6 miles a day to fetch water. This task has serious consequences

on children’s health and education. Due to a lack of access to potable water, families are forced to drink dirty water every day, which causes a number of diseases

and poses a real danger to the health of vulnerable people. Every day, more than 800 children under the age of five die from water-related diseases. Water scarcity is also responsible for many cases of malnutrition among young children. It leads to poor harvests that prevent families from being able to fully meet their needs. The absence of potable water—including in schools—is a major obstacle to children’s education. Children’s daily chore of fetching water and their repeated illnesses deprive them of a quality education and the ability to free themselves from the situation. Millions of school days are estimated to be missed every year in the world due to water-related diseases.

What do we do to support this cause?

Every year, the Engyea Group’s brands WC Loc, Happee Services and Waterlab Services sponsor the charity race Urgent Run Paris to collect donations on World Toilet Day. The aim of this charity run is to raise public awareness of the urgency of the world situation and to collect donations for associations that fund health programmes in the world. This year €10,000 was raised, enabling vision du Monde to continue installing drinking fountains in the village and building latrines in schools. 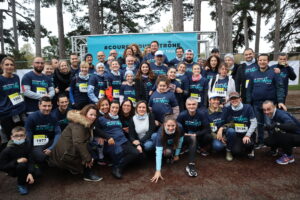 Let’s rally behind this cause together and help give 7.7 billion people on Earth the same access to hygiene facilities, the 2030 objective: toilets everywhere for everyone!

Discover our other news

ISO 20121, the road is clear for Waterlab Services

AGEC law : a new regulation for the use of water in events

In a world where access to drinking water is still very limited, we use and throw away 36 million single-use plastic water bottles a day in France and one out of two bottles will never be recycled. This number continues to grow as the market for single-use bottles continues to increase each year in France and Europe. Moreover, almost 93% of this bottled water is contaminated by micro-plastics or endocrine disruptors. These figures are alarming and show that we must act as quickly as possible to remedy this situation. It was with this desire to change things quickly that the government published the AGEC law two years ago.

For years experts have been sounding the alarm about increasing water scarcity. By 2050, almost 1.8 billion people could be living in regions where water reserves have been completely used up. And yet without water there can be no life. What challenges do we need to meet to preserve this vital resource? Our experts are here to tell you!